Last week (or two) I’ve been working on various aspects of the tank game. There have been quite a few changes and here’s a quick run down:

Unity 5 came with loads of goodies I didn’t have back when I started the project. One of them is the improvement of the graphics engine and the addition of physically based shading (and global illumination). Others are the availability of image effects and reflection probes in the free edition of the engine. 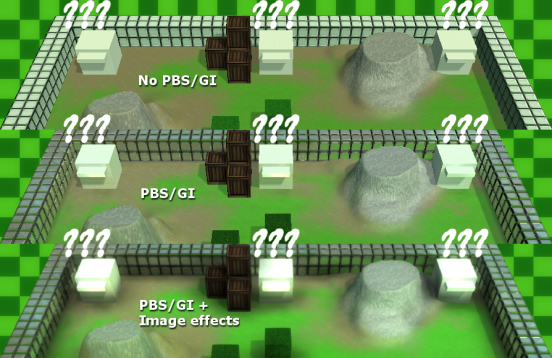 After tweaking materials, sky-boxes and lighting settings a little the effect was mind blowing. The second image is a bit of an oversell as Unity 4 did have reflective shaders (but it wasn’t that easy to set up, and also they didn’t blend reflections from different cube maps).

Among everything else I made the water look nice. By using both the main and secondary normal maps on the standard shader and animating the two offsets to go in different directions you can achieve this effect:

…which is pretty much what the legacy “basic water” does, but better as it works with the standard shader instead (C# code here).

I wanted to keep the toony look so I went ahead and added a few fake image effects on top of everything :

With the new terrain and revamped physics movement it becomes easy to get stuck in a hole (which is far worse than getting destroyed). To fix that weaggles can now get angry and explode in rage, destroying everything nearby… just like bombs (they even get the same red coloring). The explosion doesn’t happen instantaneously, you have to charge it for 3 seconds by holding a button, and you can cancel it at any time by releasing the button. You can’t take the enemy with you on reflex right before they shoot you, but you also won’t explode by accident. Despite the charging time, it’s a great utility that’s always available when you want to blow things up.

Another gameplay change is with the bullets. They are now truly physical (and along with them pick-ups became rigid bodies as well). What this means is that bullets are controlled by forces and also upon collision apply force to other rigid bodies they come in contact with.

This new mechanic allows you to push object from distance, ones you cannot reach otherwise or ones you don’t want to approach (such as bombs). When first shot bullets are unaffected by gravity (and behave like they used to), when they hit something they apply damage, ricochet in a random direction, fall to the ground, and remain as harmless rigid bodies for a while. This is interesting because for example you wouldn’t be able to push a crate by shooting directly at it (as that would break it), but if there’s a convenient wall next to it you can bounce bullets off it to make the crate move.

Did I mention that bullets now have a new model, leave a trail and create sparks when they hit something?

Last but not least I managed to get it running on Android. I tried building the game on Android right after I applied all the fancy graphics… big mistake. It was running with a frame rate of about 3 FPS. After reverting all that and reducing the terrain quality (as its resolution is pretty high) it was still performing poorly. Profiling showed that physics was eating the CPU, after reducing the quality of the physics simulation it now runs at 20 FPS and it looks something like this: 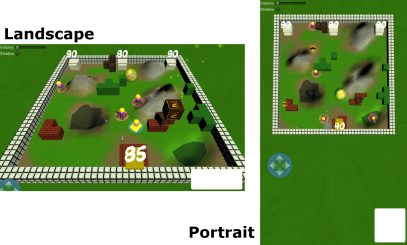 At first neither portrait nor landscape looked right on my device, the camera was positioned wrongly. As a generic solution I animated the camera with the aspect ratio as a control variable so it should now look right on any aspect ratio (regardless of the device).

Another thing I did in relation to mobile was to atlas the textures and start putting everything into a single material for which the new rendering engine proved again ingenious. Just by using the new standard shader and a single material you can render all diversely shaded objects in the scene which was not possible with the many families of shaders in Unity 4. When switching to mobile you can now simply change the shader of a single material, which is amazing.

I plan to dig into multiplayer again sometime soon, the new networking API solves a lot of obstacles I had stumble the last time I tried it. It is now quite easy to make mixed local-network multiplayer and also quite easy to allow players to join at any time.

It’s been almost a year since I first started making Weaggles World War (the tank game), then there was a jam, then there was Winning Streak and then my summer job. For quite a while I had not opened this project, but last week I finally did and I started toying with it.

Unity 5 had broken a few things – some were easy to fix, others slightly less. The biggest problem I had (and still have) is that the collisions are now much more sensitive and sliding a box on a floor made up of boxes is not possible as it catches the edges of the boxes bellow (this problem). There probably is a workaround, but instead of fighting I just accepted it and decided to use a more interesting alternative – unity’s terrain. So, the old 3 levels are still there, but not very playable, and I’ll be making new ones using terrains. One handy trick that comes with height map based terrains is the ability to deform them at runtime, raise mountains or dig holes, make craters, etc  :)

I also tweaked a lot of physics and control settings. Tanks no longer move in set increments (no more ForceMode.VelocityChange or transform.rotation = X). Instead everything is internally controlled by forces, the way physics is meant to be.

I allowed crates to rotate freely on the map (not just the y axis as they used to) and with that I had to change the way the bouncy damage animation works (as they would jump on their local up axis… nothing drastic).  And last but not least – destructible meshes. Crates now will shatter when they take enough damage and spawn physical shards (which will disappear after a while). It just makes destruction so much more pleasing and makes you want to break a crate as soon as you see one ^_^.

The shattering effect is not perfect as it’s a crate made of planks and the shards are irregularly shaped, but it does the job :)